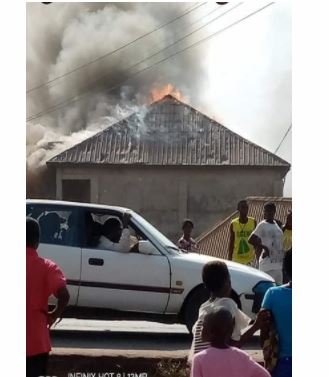 Angry youths of Daudu community in Guma Local Government Area of Benue State, on Tuesday, set ablaze Divine Shadow Church in Daudu over allegation connecting its founder, one Prophet Joshua Uhembe, to disappearance of male genitals in the community.

The youths had three days ago protested on the major Makurdi – Lafia highway over what they described as the disappearance of six persons’ manhood in the community within one month.

Our correspondent recalled that one young man accused of stealing the genitals committed suicide last month in a classroom in the locality which also hosts three Internally Displaced Persons’ (IDPs) camps.

But in the fresh arson of the church, the youths alleged that Prophet Uhembe and his accomplice, Noah Saka, were masterminds of the genitals disappearance.

Nongu Francis, who claimed to be a victim, told our correspondent that his genital was stolen on October,10 this year allegedly by the deceased who committed suicide.

Francis said he had worked in the farm of the deceased who later lured him to perform some bathing rituals with an instruction to stay away from sex for about six days, stressing that after obeying the command, he could no longer function sexually.

The victim further alleged that his situation was similar to many others who were bewitched by the deceased and his accomplice who would later recommend their victims to the accused prophet for deliverance and possible restoration of their organs.

Francis said his case was not a total disappearance but inability to get erection as it were before the ritual bath, adding that he now remains hopeless following the death of the accused man.

Another youth from the community, who simply identified himself as Jonah, said the continuing disappearance of the victims’ male organ propelled the burning of the church whose prophet the community suspected was instrumental to the alleged act unsettling youths of the community.