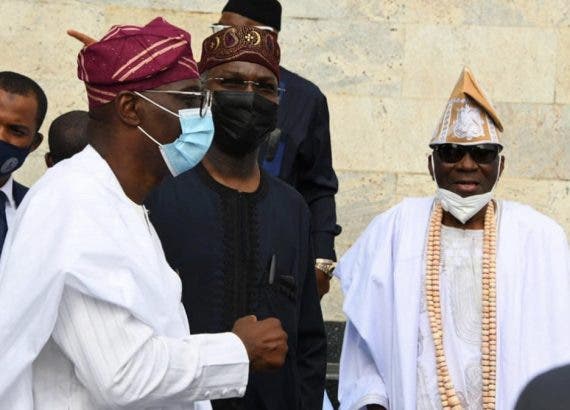 Oba of Lagos, Oba Rilwan Akiolu, has made his first appearance on Sunday, November 8, after his palace was vandalized by hoodlums who hijacked the #EndSARS protest on Wednesday, October 21.

The monarch was pictured at a Peace Dialogue organized by leaders of thought in the South West to address the issues that led to the recent nationwide protest, which ended in violence that shook the region to its foundation.

On Wednesday, October 21st, hoodlums attacked and gained access to the Palace of Oba of Lagos located at Iga Idugaran, Lagos Island, where they vandalized and carted away several items.

A viral video on social media showed the moment the hoodlums also carted away with the Ona’s staff of office, popularly referred to as “Opa Ase”.

However, the Oba of Lagos was later welcomed back to his palace a week after the attack by hoodlums.

In his new appearance, the Oba was pictured with the Governor and other monarch.