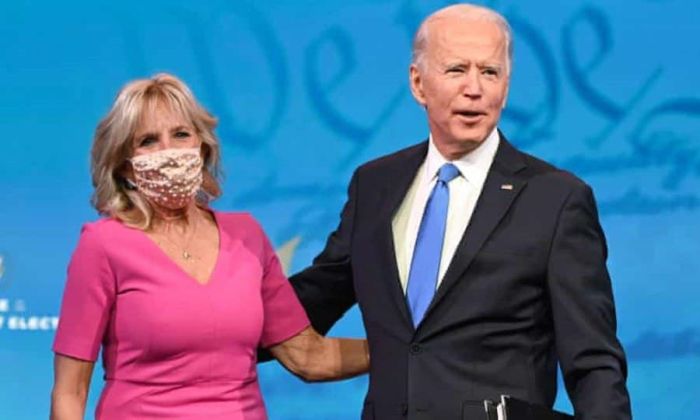 Joe Biden and his wife, Jill will on Monday, publicly receive their first dose of the Covid-19 vaccine.

The President-elect of the United States, Joe Biden, and incoming First Lady, Jill Biden, will receive their first dose of the Covid-19 vaccine in public on Monday, the transition team confirmed.

The location of the event is yet to be officially announced, though would happen in Delaware and it is expected that the Bidens will also use the occasion to thank health care workers at the facility for all their efforts in saving lives.

President-elect Biden has strongly expressed his desire to take the vaccine to ensure continuity of government and set a good example for the general public and also make a case to members of the public that the vaccines are safe.

According to the incoming White House Press Secretary, Jen Psaki,

“It’s important to us, as he has stated many times, to send a clear message to the public that it’s safe.”

What you should know

The formal announcement of President Biden’s vaccination comes a day after one of his top officials, Rep. Cedric Richmond, tested positive for the virus, and just a few days after a member of the transition’s press pool was infected.

The Bidens will each receive a second dose of the Pfizer vaccine three weeks after the first, allowing them to be fully immunized before their scaled-down inauguration in late January.

Vice President-elect Kamala Harris and Second Gentleman Doug Emhoff will receive the shot the following week to avoid a situation in which all of the leaders of the incoming administration experience side effects at the same time.

What they are saying

“We wanted to step forward and take this vaccine to assure the American people that while we cut red tape, we cut no corners.”
The Senate Majority Leader Mitch McConnell, who recently received the vaccine said,

“Just received the safe, effective COVID vaccine following continuity of government protocols. Vaccines are how we beat this virus. Now back to continue fighting for a rescue package including a lot more money for distribution, so more Americans can receive it as fast as possible.”

It is hoped that the televised vaccination will help calm distrust of a vaccine produced in record time.