Nigerian musician, Peruzzi alias Huncho, has revealed that he does not smoke. The DMW recording artist and songwriter disclosed this information via Twitter.
A fan had taken to the micro-blogging platform to hail the singer’s musical prowess.

“@Peruzzi I’m asking you again for the second time, wetin you dey smoke before you enter studio??? Because e be like say when God dey pour lyrics, melodies and vibes your own over full“, the fan tweeted.

Peruzzi simply gave a short reply that he does not smoke. “I don’t smoke“, he responded by quoting her tweet.

See his reply below: 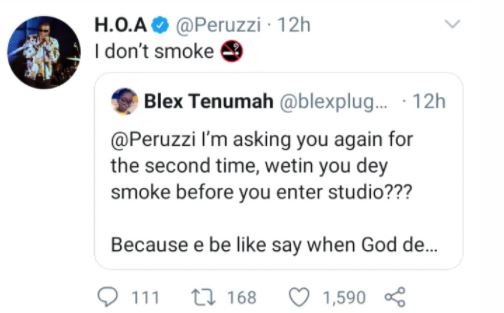